When to walk away? 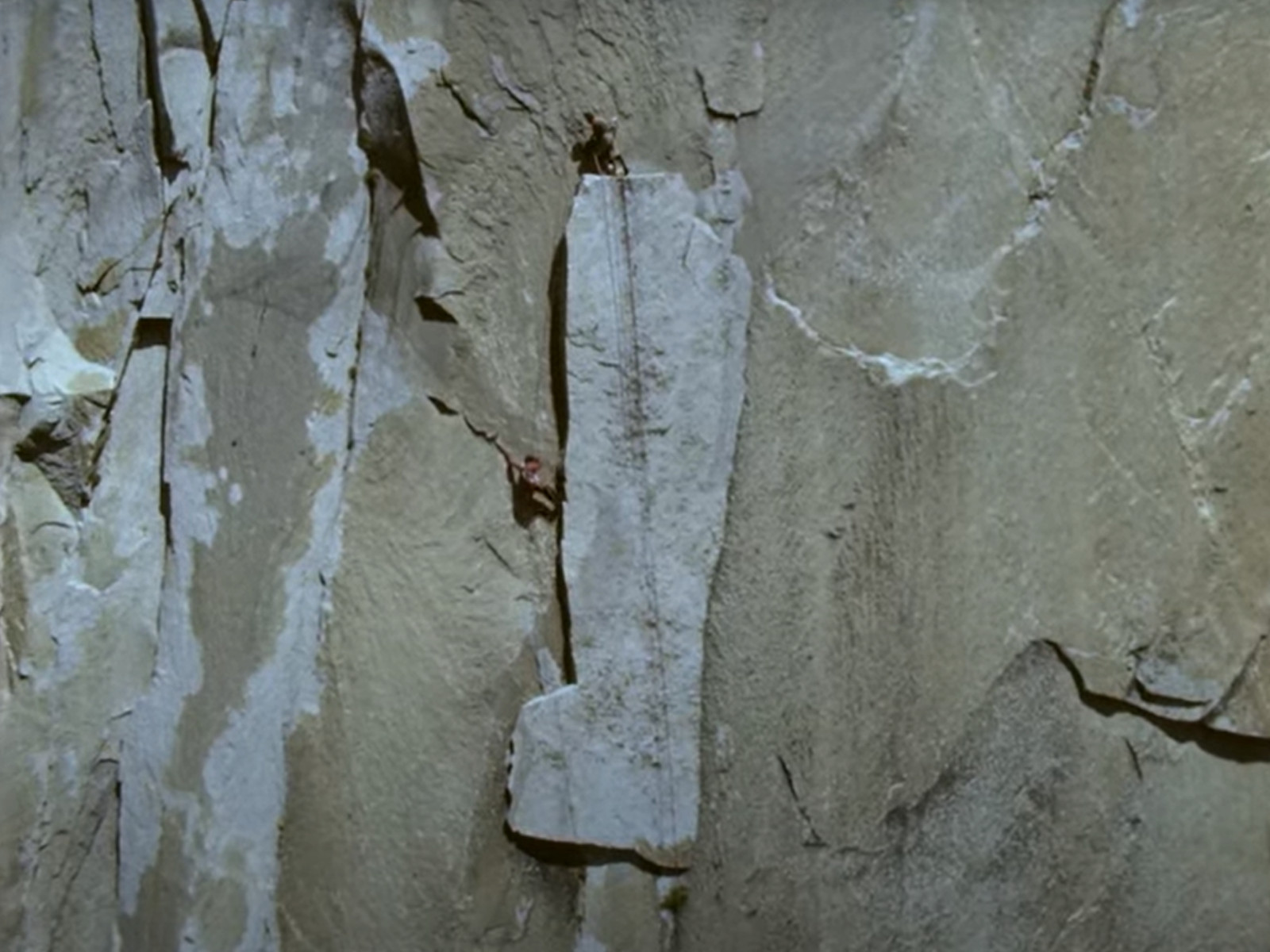 Climbing is full of stories of the siege.

We have a deep-seated respect for people who are prepared to put in a unjustifiable amount of time and effort to a project, even when sometimes the tactics are questionable. But is it a kind of gambling addiction? Most of us don’t have the staying power to see something through multiple years and training cycles. But inching closer to that goal can feel like spinning the wheel again, with the enticing prospect of a payoff.

In Factor Two we’ve told a lot of stories from Yosemite – you could argue too many. The next episode is another one, probably the last for a while, but also perhaps the most interesting: Fred Padula’s iconic film El Capitan.

There’s a thread that runs through the Yosemite stories, in the context of forcing the way or enjoying the ride. When you think about the first ascents of these walls, with the primitive gear on offer and retreat complex, it’s no wonder that they were often sieged.

Most famous, of course, was Warren Harding’s ascent of the Nose, spread over 18 months. It needed special permission from the park, hundreds of metres of fixed rope and a tenacity that few could muster. Most recent is the first ascent of the Dawn Wall, which I talked about in the last newsletter.

But the ascents Factor Two has documented have been very different to these. For Ben Bransby, Leo Houlding, Patch Hammond and Duncan Critchley the thrill of the wall was in a kind of disrespect for the challenge. Duncan swung leads up The Nose with Romain Vogler in 1984, saying the beauty of the challenge for him was that it was “just a big day on the crag”. Patch, Ben and Leo had the arrogance of youth to propel them up Freerider and El Niño, foregoing inspection and taking a plunge into the unknown. The thrill was in the journey – it’s a cliche, but it’s accurate here.

Media accounts love to frame a siege as a “journey”. We can all identify with that. It places the root of the story in plain language; How did our hero emerge changed? But it’s a different kind of journey. That framing is purposeful, and I’ve done it myself.

When the goal seems too big the journey is a useful tool. It makes it possible to convince yourself that the small steps are something to celebrate. It helps to keep you motivated. And it disguises the fact that the real satisfaction will come from completing that goal – if you ever do. But, maybe, some people just have a little extra grit?

How big should our goals be?

I wonder sometimes if I’m too reserved with my own goals and projects. In climbing terms I have a couple of routes I consider to be sieged – Point Blank in Stennis Ford, and Body Machine at Raven Tor. I’ve finished neither of them, despite coming embarrassingly close on Body Machine. It’s a route I probably could have finished easily if I’d stepped back and done some specific training, but my goal in getting on it was simply to do the links between the bolts. Just some of them at first.

On day two I did the crux; a horrible, sharp crimp at the second bolt which left my fingertips numb until I got home that evening. I reached the stage where I could climb every section consistently and smoothly, where the crux didn’t feel that hard any more. And yet I couldn’t finish it. I was never quite prepared to put that extra bit of effort in that would see me recover properly at the rest before the final section. And then I moved away.

The problem was that I wasn’t looking at these projects with much belief. I was just dabbling. I needed something else to draw me in to make me think that the training would pay off. If I’d put it in place at the start I’d have seen them through. Forcing the issue didn’t work, and stepping away to train felt removed from the original goal.

Our Yosemite heroes put in the time away from their routes. Duncan soloed extensively in Arapiles, Ben, Leo and Patch with enormous mileage on rock in the UK. And all, bar Patch, returned to the scene of these ascents. Duncan repeated The Nose In A Day in 2014, as well as completing his solo ascent of Sunkist in the 1990s. Ben returned to climb Freerider properly, then again to do it in a day. Leo had embarked on a new route after El Niño. His is the only one that might be called a siege, returning over more than a decade to eventually make the first ascent of The Prophet.

Over the past few weeks I’ve been researching and interviewing for the next episode of Factor Two. The story led me down a slightly different route to what I expected. Initially I just wanted to document the making of El Capitan, Fred Padula’s iconic film documenting an ascent of the The Nose in 1968.

But the making of story is much more interesting than that. It has all of the hallmarks of a siege. From the length of time the climbers spent filming on the face (about 6 weeks) to the high-minded and differing objectives of the team behind the film.

On the wall the filming was done by Glen Denny. It was no small feat; with the primitive tools at his disposal he had to get in a position on the face to record the climbers. They climbed and reclimbed multiple sections of the route, fixing ropes up to their highpoints and returning to the ground. This was at a time when The Nose had only had 4 ascents and In-A-Day ascents were still 7 years away.

The whole thing was filmed on an Arriflex 35mm camera in 2 minute bursts. A 100ft reel of film could record a little longer, but changing a reel in the bright light on the face inevitably flashed many of the frames. Reels would be raced off to San Francisco to be developed before returning to the valley to continue filming.

Over the next 12 months Fred and Glen fleshed out the film. They both had money invested in it, along with The North Face’s Doug Tomkins (about £200k in today’s money). The dream for Doug was to produce a film which would succeed at the box office – emulating the success of The Endless Summer, a surf film which grossed $20 million a few years earlier. Fred was more artistically inclined, and he and Glen had been promised artistic freedom with the project.

As time went on Glen became uneasy about the project. Unbeknown to the others Doug withdrew his money and abandoned the film. Fred was left with debts which would take him years to pay off. When Glen suddenly decided he couldn’t see the project through either he was also left with reel upon reel of film and more than 100 hours of audio recordings.

One the climbers in the film, Dick McCormack, told me there were: “Very few climbers in the in the early 60s. I remember one summer when the only three climbers in camp were myself, Chuck Pratt and Steve Roper. And then on the weekends, Royal [Robbins] and other people who had honest jobs would come up with the rest of us. And that was kind of the atmosphere in the valley at that time. It was our place, you know, and I guess Glen felt that too.”

Glen didn’t just back out – he went as far as asking Fred to destroy the footage. His siege was over and he didn’t want his name associated with this project. He worried that promoting the Valley would stop it being their special place. Fred couldn’t do it though. He sat on the footage for several years, until his wife said if he wasn’t going to make the film he may as well get rid of it.

It was the impetus that Fred needed to finish the project. With the help of Dick McCormack and Lito Tejada-Flores he put together a 3 hour edit of the film. Over time he ground the footage down to a core of an hour. He played with the sound design, using a musical score and salvaging some useful audio from the hours of recordings.

A decade after they’d started filming, in 1978, El Capitan was finally released. So many people showed up to the opening night that they had to show the film twice.

Doug had walked away. Glen had disappeared at a canter. But Fred couldn’t let it drop.

Far from being a documentary El Capitan is an Arthouse film. It’s unnarrated, musically scored, the climbers didn’t actually complete the route and several scenes are rigged, including the cover sequence of the moon crossing the wall.

It’s a far cry from the last episode of Factor Two, documenting the myths around Hard Grit, but they’re both capturing sieges of a sort. And all sieges require a certain mental fortitude to succeed, but they also require a touch of insanity.

For Fred the siege still wasn’t over. Decades later, frustrated at the poor quality of the VHS version of the film he set about remastering it, painstakingly retouching 80,000 frames.

“It was kind of a period of madness in my life,” he told me. I started to realise that in Fred’s case this wasn’t quite the siege I’d thought. There was no endpoint. No easy goal to measure.

When he’d made the original print of the film in 1978 he showed it to some friends. The poet Gary Snyder was there. “He looked at it and he says, “Fred it’s done. Don’t touch it. Just leave it as it is.” And that gave me the confidence. And that’s kind of how it finishes by him saying now, it’s good enough. Leave it alone.” But he never really could.

You’ll be able to hear more from Dick and Fred in the next episode of Factor Two.

In latest episode you can listen to Rich Heap, Niall Grimes and Seb Grieve talking about Hard Grit.

Factor Two is something I’m hoping to grow in 2021, taking on a bit of Fred’s gumption for a big project. Look out for more on that soon.

I wrote a piece for Climber Magazine a few years back about redpointing Sardine at Raven Tor. I’ve republished it on my site. It’s not quite a siege, but did take place over a few years and explores that strange sense of loss that you can feel when a project is completed.