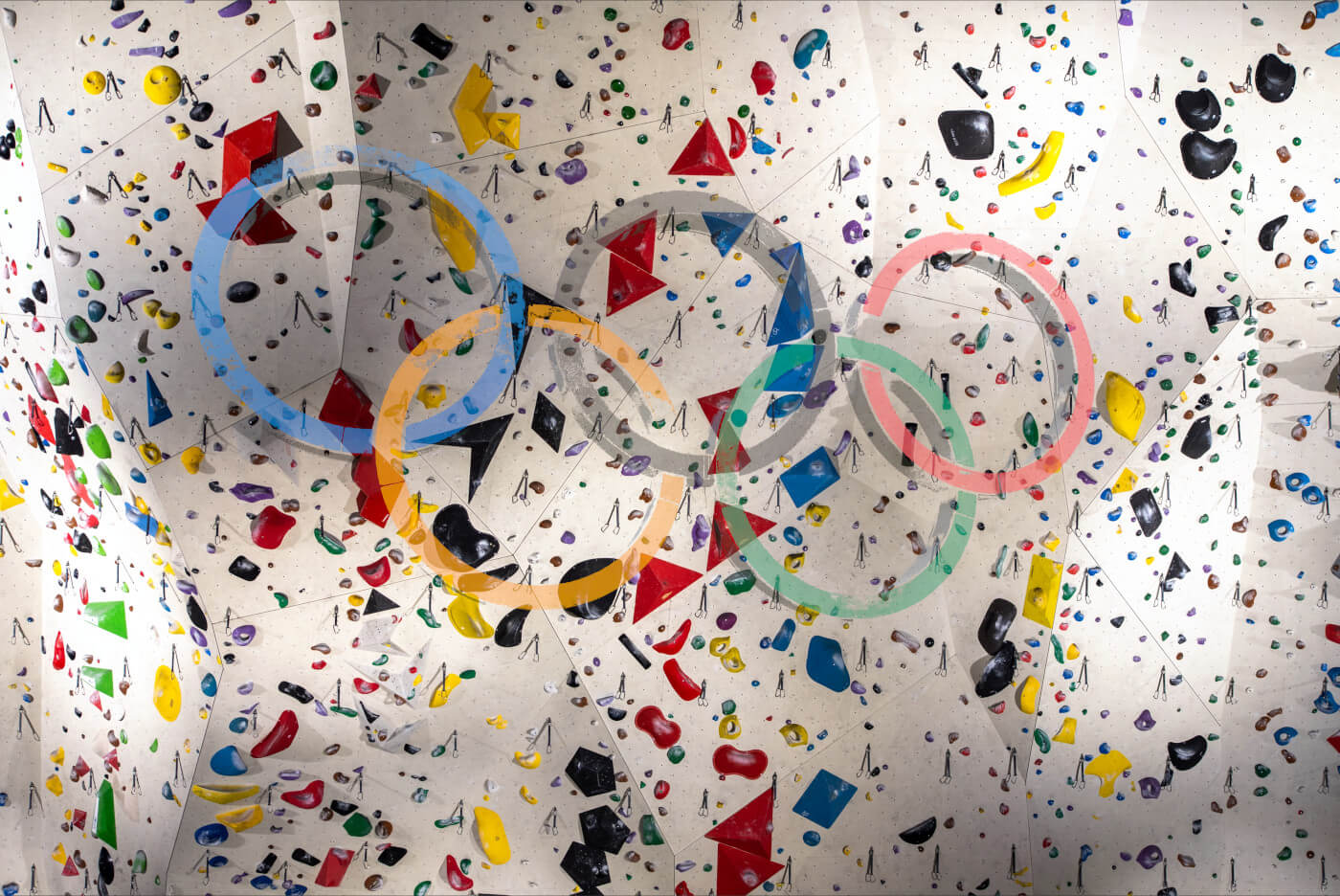 One of the things that has always most intrigued me in climbing is the question of Is it even physically possible?

There are plenty of examples in the climbing world of routes that were once deemed impossible. Many of them have been climbed, many more await an ascent. What we imagine to be possible has been a shifting line, with tactics, training and new inventions forming the picture of how our sport has evolved.

Plenty of other sports have had similar boundaries moved over time, the 4-minute mile being perhaps the most famous example. There will be a boundary line in all sports of a certain type, but the fundamental aspect of pushing towards and past that boundary is the same. In climbing it’s different. It’s not just a case of whether you can be strong enough, flexible enough or luck out with the conditions, it’s also whether there is even a possible sequence that will work. That’s what sets it apart in my mind.

It’s also why I think routesetting for elite competitions is such an interesting challenge.

I spoke the the Chief Routesetter for Bouldering at the Tokyo Olympics, Percy Bishton, to find out more.

Percy Bishton has been at the forefront of routesetting since it began.

In the mid 90s he was calling round climbing walls, trying to get them to engage his services in a burgeoning industry, after having a positive response to the routes he’d been setting at The Edge in Sheffield.

“I think I kind of invented my own job. It’s what happens when you’re not interested in getting a proper job and you just want to go climbing,” he told me. “I reached the point where I was either going to train to be a woodwork teacher or I was going to be a routesetter and I took the routesetter route.”

In doing so Percy became the first full-time routesetter in the UK, and one of the first in the world. The 49-year-old had no idea in those early days where this was going to lead him – ultimately to being the Chief Routesetter for Bouldering at the Tokyo Olympics.

He attributes part of his success to the sheer volume of personal climbing he has done, meaning that he has a lot of inspiration to draw on.

“I spent a year, pretty much, after university just climbing on the grit every day. This was back in the days when you could go on the dole and no-one would chase you too much or bully you into getting a job you didn’t want. So you had time to do stuff you wanted to do, and I just went climbing on the grit. I think that experience of outdoor climbing sparked my curiosity.”

Climbers have always been inventing problems and sharing them. Early climbing walls, like the Broughton Wall and Leeds Wall, had holds that were in set positions. Inventing new problems using the available resources was part of the game. In fact, even when I started climbing in the late 90s my wall had a “Problems Book” where you could list, in intricate detail, the boulder problems you’d invented.

Once walls started using bolt-on holds, you could re-imagine things and start to create imitations of the problems you were climbing outdoors. Many earlier climbing holds were modelled directly on different rock-types, sometimes successfully. Percy says that he discovered quickly that it was actually very hard to directly imitate the problems he was climbing outside. Problems created in this way often felt stale, and back in the 1990s the selection of holds at his disposal was a lot smaller.

Since then the variety on hand has increased exponentially. There’s even a catalogue for the holds that will be used in Tokyo — it runs to 36 pages. There will be 8 tonnes of holds at his disposal for the Games this year, and he’ll show up without a specific plan for what the problems will be.

“In the 1990s we were pretty limited with the kind of thing we could create, both with the holds and the walls as well as the style of climbing,” he says, “they were all bolt-on holds, we didn’t have the selection of screw-ons and volumes that we have nowadays.”

“I went to a competition in northern France and saw some of the first triangular volumes, so I came back and made my own. I made crack systems, cutting holes in the fibreglass walls to put cracks in them. I did all that sort of stuff just to make it different. I never wanted to be a hold manufacturer, but being able to make them myself really helped my setting style.”

In the late 90s Percy did a routesetting course with the BMC which led to his first taste of setting for competitions, starting at national level, but quickly moving up to setting at international competitions, including the World Cup. At this time bouldering competitions were still in their infancy.

“You know, back in those early days it was a time when you’d have an international superstar to test the route to make sure it was just the right level. And you know, I really enjoyed it, I’ve always been lucky to have a group of setters that have been just great fun to work with. People like Ian Vickers, Andy Long and Jason Pickles.”

With bouldering entering the fray, setting was becoming more creative. It allowed a chance to create problems that needed to be figured out — genuine problems. In the lead format trick moves and hard to read routes made it difficult to separate the field, but in bouldering those same tricks were exactly what was needed.

“My first big international comp was in 2003, with Ian Vickers,” he says. “Setting for bouldering is a physically harder job, you have to do a lot more climbing., but it sparked my inspiration a little bit more despite very long days of work.”

“While I’ve done plenty of long sport routes, it was never really my thing. Bouldering was just a bit more interesting to me, a bit more immediate. As my international setting career started to take off I decided to specialise more in bouldering.”

The key challenge in setting for competitions is having only 4 problems to split the field. The Olympic format allows climbers 4 minutes per problem, and in the final they don’t get to see other climbers trying them. Climbers are scored on the number of Tops, the number of Zones (a defined hold halfway up the problem) and further separated by the number of attempts at each within the time limit.

So how do you go about achieving this?

“In an ideal world you’d have all of the problems climbed by at least one person, so everything is proved to be possible by the competitors,” says Percy, “the essence of it is problem solving. We want to build in complexity so it’s not very easy to understand what to do. You’ll have to try lots of different ways to be successful.”

“It’s called building in risk, not risk of harm, but insecurity, so that you fall off. And then, obviously, we’re looking to set in lots of different styles.”

Those styles have evolved a lot over the past 2 decades. From imitating outdoor problems to creating Parkour-esque challenges. Artificial boulder problems now require a much broader skillset, testing co-ordination and timing as much as raw strength and finesse.

One of the interesting features of routesetting for competitions is the lack of control once the competition has started.

“You have to make an educated guess at what the climbers are capable of, but then you sit back and watch it unfold. It’s a bit like purgatory, if it’s not going well it can feel a bit like torture, but there have been comps where it’s just been great. You get these magical sporting moments, and that makes it all worthwhile.”

“I set for the World Championships in Paris in 2016. The finals of that competition were great, everything just worked out, not exactly as we’d planned it, but it all worked out just to make it a mega final, with a huge crowd of very enthusiastic people.”

“You know that feeling, when you’re in a sporting arena and there’s something special happening?”

After that competition Percy thought it might be time to retire on a high, but it never quite happened.

“Routesetting is quite addictive,” he says. He had offers of other setting work that interested him, but he had decided he would retire soon. He was all set for his last event, the World Beach Games in Doha, when he had a call to ask if he’d like to set for the Olympics.

“It came out of the blue, so I went away and spoke to my family and colleagues. It’s an extra 10 weeks of my life where i can’t do my normal job. It seemed too good an opportunity to turn down, so I’ve delayed retirement for another few months.”

I spoke to Percy back in March, before we really had an idea of where 2020 was heading. He’s had to delay his retirement a further year, but will still be the Chief Routsetter for Bouldering at the 2021 Tokyo Olympic Games. This time he says it really will be his last.

You can find Percy on Instagram, where he’s mostly showing off his latest workworking creations.

Percy is also one of the owners of Sheffield’s Climbing Works.