Looking for the Key 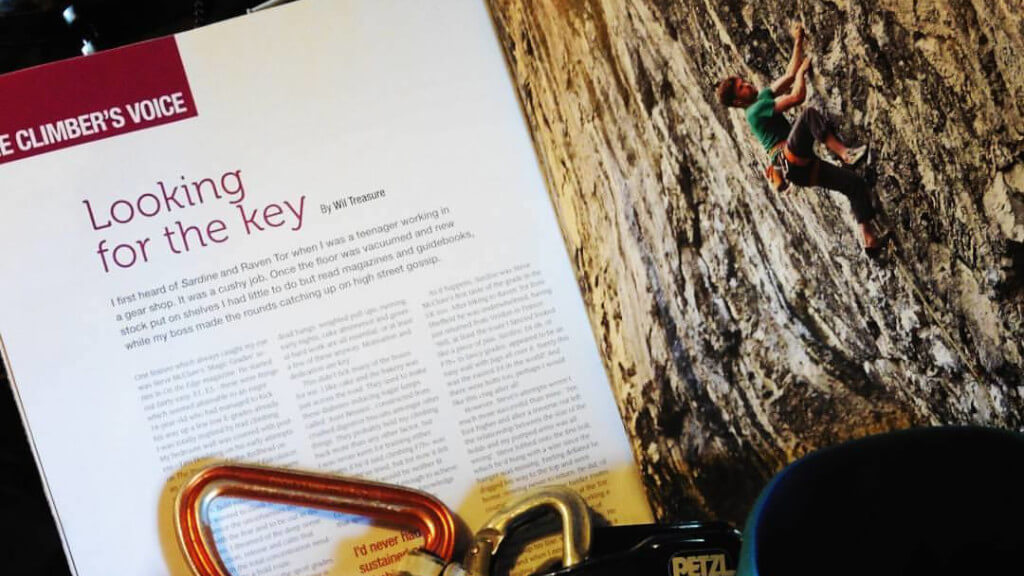 I first heard of Sardine and Raven Tor when I was a teenager working in a gear shop. It was a cushy job. Once the floor was hoovered and new stock put on shelves I had little to do but read magazines and guidebooks, while my boss made the rounds catching up on high street gossip.

One feature which always caught my eye was Steve McClure’s ‘Magic Grades’ series in On the Edge. He started out fairly easy, E1, E3 – these were things which seemed attainable to an eager 18-year-old who had managed to kick his way up a few low E-grades already. I was totally inspired by trad climbing. My bedroom wall was covered with posters – Leo Houlding on his early attempts on the Prophet and John Redhead on an attempt at the Tormented Ejaculation were my favourites.

These climbs were hard and bold. I felt like if I climbed dangerous, bold routes I would gain respect. I wanted to climb long routes, to experience the uncertainties involved, to deal with the fear and to be out in the mountains. I dreamed of the deep sense of satisfaction, release and calm that comes with the total concentration needed to complete a bold route.

When Steve wrote of his first experience of a 7b+ I read it, but it didn’t really register as an ambition. “Climbing at this level is completely different from climbing at say, French 6a,” he wrote. “Hard training is required. Campusing, dead hangs, weighted pull-ups, running, early nights, cake abstinence and general hard work are all essential, or at least a few of these anyway. Motivation and dedication are key.”

This didn’t tick many of the boxes for me. I like cake and the bakery was just across the road. They used to make these diabetes-inducing sugar lumps called ‘Aunt Bessies’, constructed from crushed digestive biscuits amongst other things. They probably held my climbing back more than any other factor, but I was never keen for training either. Perhaps if he’d said climbing 7b+ was easy I might’ve tried, but for now it felt like something I would be neither fit enough nor motivated enough to achieve. I consoled myself with the knowledge that sport climbing is for sissies.

Fast forward four and half years and I’m stood at the foot of Raven Tor. I’ve been dragged here in the rain by Duncan. He knows I’m too weak to get up anything, but it’s the only place that’s dry. He warms up by climbing Sardine, F7b+. Three minutes later he’s back on the floor. I stand in amazement – I’d never seen anyone climb that grade, let alone as a warm up. I was also confused. Duncan is strong, but he’s not that strong.

That day I had a go on toprope and was surprised to find I could do most of the moves, albeit no more than 3 at a time before sitting on the rope, but suddenly I had a goal.
As it happens, Sardine was Steve McClure’s first taste of the grade in the UK too. After biking to Raven Tor from Sheffield he was underwhelmed, having just returned from Verdon: “Still, at least the route I fancied looked like a piece of piss. Sardine, E6 6b, or 7b+ in fancy grades, appeared to be an easy wall with jugs all over it. Surely this was the easiest E6 in the world! And there were bolts too, perhaps I would like this crag after all.”

However, Steve’s attempts weren’t much more successful than mine: “Ten foot higher and after a traverse out left the relationship between the size of the holds and my pumped arms was all wrong.” Steve lobbed onto the first bolt, which he’d hung with a wire since the hanger was missing. Feeling deflated he dogged his way to the top and went home, vowing never to return. He did, of course, adding his own far harder routes.

By chance, on my first day at the Tor Steve was there too. He was working a line that cut through the traverse of Rooster Booster, creating a new 8c. He cruised up his line, warmed down on an 8a and when I next turned round he was dangling upside down in a tree doing sit-ups. All this while I was dangling uselessly from the second bolt of Sardine, trying to remember how exactly I had managed the crux move before. Watching Steve I wondered if I really had the motivation to climb this route.

Two years on I was back again. Sardine had received intermittent attention, but completing my final year of university and then starting an MA took over from getting fit. Despite returning I’d never had a sustained period of climbing to gain the fitness I needed for this route, and I really had no idea about redpointing tactics. The six weeks after my final exam had changed that, and I was ready for a serious attempt.

Pulling onto the initial polished and dusty holds sets my heart racing, normally this is just nervousness, being in front of a crowd of far stronger climbers, but today it is fear of failure. Of failing on a goal that I now know is within my grasp. But there is also a bubble of excitement battering for release from my chest. This is a milestone. The absent daydream I never thought would actually be achieved.

I slide my way into the first jug, crossing through to push my fingers into the next slot and start the traverse. Feet swing free and are planted with careful concern onto footholds which spit the unwary off without a second thought.

Stretching across I feel my toes slide as I press each fingertip into the next edge. I match and bring my foot back to push through the next move. A throw. I hang in the air in slow-motion as I watch my hand onto the next hold, positive and comforting. One more move and I’m on the jug.

I shake the aches from my arms and press on, the holds here are flat and useful, but the wall is steep and I can’t hang around. With fingers wrapped around the largest, highest edge I begin the traverse back right. The first traverse is all about finger strength and body tension, but this one is about footwork and balance.

I hum my way through the moves. Right foot, left foot. I reach for the undercut. It feels good – body position is important here. Clip. A reach for the small, insecure pinch for my left hand causes a flutter. Breathing deeply I shuffle my right hand to the two finger edge I need to hold my balance. Left foot, right foot. I’m set.

The next move will land me on the jug, but I’m frozen. I have to bounce into it, sinking my fingers into the pocket. I’m excited – that’s the hardest climbing over – but I’m barely halfway and I try hard not to burst the bubble of concentration that has got me this far.

My forearms are tired and with each move I try to shake life into them. I know the holds up here. Each has its own character. The two finger pocket, the sloping edge and my favourite, the incut, two-hand crimp. From this crimp I attempt a recovery. It’s too late for that, but the distraction is enough as I force my fingers into the crack above. A quick foot-shuffle and I can grasp the side-pull. Pushing my weight across I kick out, searching for one of the small concretions to take the weight from my arms.

On fading arms I pull through the most worrying part. The finish involves a hollow section of rock and far from being concerned I will fall, I am worried I will alter this route, with my tired arms lunging at the delicate rock. I try to calm myself to make the reach, pushing my weight into my feet as I dare to trust the edge. Two moves and I make one last pull to the sanctuary of the finishing jug and clip the belay. It’s over.
Sardine is the crag warm-up, but I feel cold. I don’t feel the elation I hoped for from clipping the chains. I feel as hollow as the flakes that taunted my aching arms at the finish. My absent daydream is no more than that; the moment is lived out, the world is the same.

Alan Bennett said life is like a tin of sardines – we’re all looking for the key. In my case sport climbing has become about the process and not the completion. Ticking a route simply means you have to start another, and the process begins again. The excitement comes from making the impossible possible, not from proving that fact.

It’s appropriate that Sardine is the warm-up.

As I glance at the overhangs to my left I wonder what the next hollow goal will be?