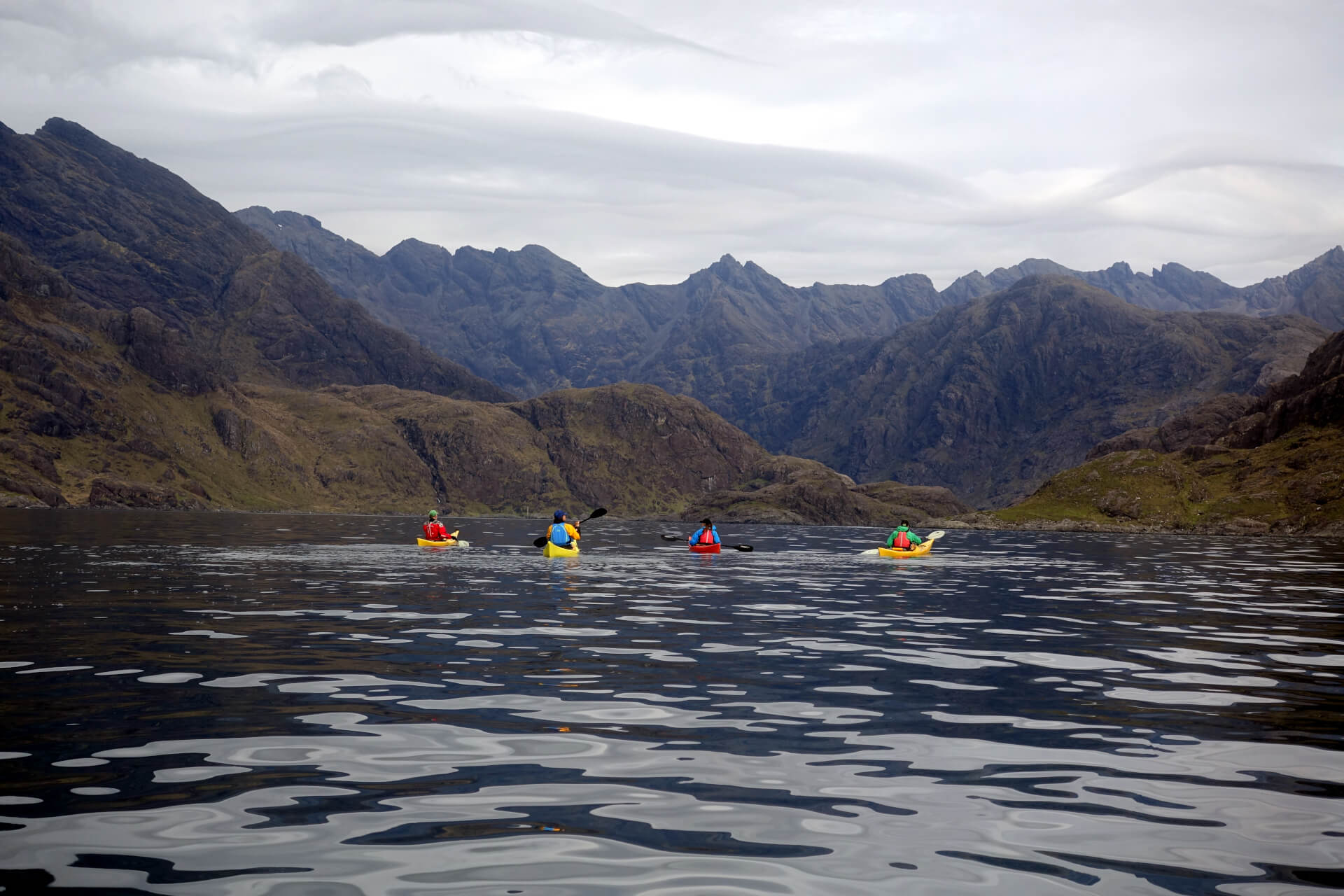 The past year has been a strange one for adventure. Like most of us, I haven’t left the country which has curtailed some plans for bigger walls and mountains, but also relieved a little bit of climate guilt.

I moved up to Edinburgh last autumn, and it’s opened up a world of new adventures that were all-too-easy to avoid in the past. I’ve made a lot of trips to Scotland over the years, but always been a little hesitant at getting caught out by the weather, when for the same journey time I could be in the alps or Spain.

In the past few months I’ve been able to get stuck into some Scottish adventures, and it’s reminded me of what a great country it is – as well as how remote some objectives are. We might have no true wilderness in the UK, but in Scotland you can get a long way from civilisation in a manner that isn’t really possible in England and Wales.

At the end of May I had a trip to Skye where we spend the first 4 days sea kayaking with the excellent Mountain and Sea Guides. We’ve learned a lot on the water from Mike Arkley over the past couple of years, and I’m finally starting to develop some muscle memory and feel more natural in the boat. It’s a great way to explore the coast in Scotland.

On the final day we paddled across calm seas into Loch Coruisk, then portaged the boats into the loch and paddled under the Cuillin Ridge and the Dubh Slabs. It was a wonderful way to end the trip and the closest I’d actually been to the Cuillin, as on every other trip I’d been driven away by the weather.

Not wanting to waste an opportunity, we camped at Glen Brittle that night so that I could attempt the Ridge the following day. I was quite excited about this – I felt I hadn’t had a proper big day in the hills for a while. I was also aware that my fitness might not be up to a full traverse in a day, but it’s pretty easy to escape the ridge in various places, so my plan was to just see how I felt and escape back the campsite if necessary.

Going solo meant I could also go very light. I’d intended to take a rope for some of the abseils, but after speaking to a few people about tactics, I decided I was unlikely to have any issues downclimbing and could strip a few kilos out of my bag instead.

The forecast wasn’t perfect, but I didn’t want to waste a day and thought that the cloud cover might be preferable to the full sun on offer a day later. The cloud was forecast to lift early in the morning, so I left confident that after finding my way along the initial section in the mist I’d be into better visibility once I reached the technical parts.

I left the campsite at 4am. I’m not a morning person at all, but I still love an alpine start once I’ve got going. The as no-one else around at all, which surprised me, but actually most teams take a two-day approach and with good weather in the afternoon it makes sense to leave after lunch.

The early mist on the hills didn’t concern me at first, but as I started to ascend the mist came down to meet me and turned to light rain. Being a little sleepy I missed the path junction leading to the screes of Gars Bheinn at the start of the ridge. This isn’t a big deal – lots of people take a different route and go out and back along the start of the ridge, so I decided to follow that route instead and began the steep climb up to Loch Coire a’Grundda.

As I entered the coire the path became more faint and the cloud more dense. It lifted in sections and gave a great view of an intimidating and very alpine setting. It certainly felt a long time since I’d been in this kind of environment.

Eventually I lost the path. A confusion of small cairns and wear and tear on different parts of the rock led me astray, and the poor visibility meant that I couldn’t easily see what I was aiming for, so I followed what seemed like a logical line through the stepped slabs and grooves with interesting scrambling and good rock, hoping I would find the loch and reorient myself.

That never happened, I continued to climb and follow signs of wear and eventually reached a ridge line in the mist. I was a little disoriented at this point, and the ridge is complex and leads in multiple directions. I don’t usually carry a GPS in the hills, and my compass was wavering and uncertain on the magnetic rock. I decided to follow my instincts on direction, and had been keeping tabs on the twists and turns on my scramble, so I was fairly confident of which direction I was heading, even if I wasn’t certain exactly where on the ridge I was, or in fact if I was on the ridge proper at all.

I made my way along the ridge that I did have, taking a few wrong turns and retracing steps, becoming a little less confident with every turn. As I scrambled, the weather cam in further until the rain became too much, and I found shelter in a cave. Echoing around the coire below were the voices of hidden walkers and scramblers.

By this time I was starting to realise that I wasn’t going to get very far along the ridge today, but I had at least managed to find familiar features and knew that I was near the TD Gap. This was confirmed later when I could hear the jangling of gear and climbers clearly pitching a section nearby, although I still couldn’t see them.

I waited in my cave and nibbled on jelly babies. I decided it was time for my emergency coffee. I was dry and warm in my little hollow and enjoying the sense of being alone and isolated, which was starting to feel more familiar. I decided to wait out the weather before continuing, I wasn’t going to be soloing the TD Gap in the rain. I waited and waited and the weather got worse, the rain heavier and the cloud thicker. The voices disappeared into the distance. I hadn’t seen anyone at all since my departure, not even from a distance.

As I waited, I started to become more uncertain. I convinced myself that I wasn’t near the TD Gap at all, that perhaps I was facing the wrong direction altogether. I started to doubt my memory of the path I’d followed to get this far. Checking my compass didn’t inspire confidence as the needle wavered, and I decided I couldn’t place a lot of faith in it.

It became clear that the traverse wasn’t going to happen for me today and I decided to make my way back by retracing my steps, rather than risk wandering off into the mist down the intimidating coire I’d glimpsed on the way up.

This proved a little more challenging than expected, as I wandered in circles feeling more lost and more incompetent. It was the first time in a long while where I thought, “Can I actually get myself down safely?”

I persevered, followed the loops and picked out the waymarkers I’d seen along the way and eventually came to a small, distinctive cairn that I’d arrived at before. Descending from here wasn’t trivial, with several sections of scree and tricky scrambling, but I eventually made it down the the loch and rediscovered the path that I’d lost earlier in the day. The mist still hadn’t cleared and I descended through it, happy to see some other faces out in this weather, soaked to the skin but smiling.

I dropped out of the bottom of the mist suddenly and unexpectedly. The weather below felt a little better, and at least I could see a clear path back the campsite by now.

I’d set of to have a bit of an adventure, and that’s certainly what I got! I felt a little stupid having staggered around in circles, but being out of practice in the hills was to be expected and, actually, once the mist cleared in the late afternoon and I studied the map and where I’d been I realised I’d never really been lost, I’d been more or less where I imagined the whole time, but stuck in the mist my confidence in my judgment had dropped, and regaining a little of that to get myself back down safely had been a rewarding experience.